LOOK AT ALSO "IN PROCESSING" SITE!

Vlado Franjevic is one of five artists of the professional association of fine artists of Liechtenstein, who works from 27th untill 30th September 2010 with the pupil of one school in Triesen, Liechtenstein, on a creation of the artist projects. The conclusion product of the participating pupils, three teachers and Vlado as artistic-creative leaders will be an artistic installation those name is PLUS/MINUS (II part) and is an advancement of that what Vlado as a leader of workshop at institut of fine art (ISY) 2002 in Yogyakarta, Indonesia, started to develop with the art students. To remind is that Vlado was to this time one of five representatives of the Principality of Liechtenstein in the first part of the cultural exchange project Liechtenstein Yogyakarta.

Vlado invites You to be a part of his project which, as often before, is based on the international and global networking culture exchange processes. What is to do and how to contribute?

Send the messages to young people of Liechtenstein, to pupils who will create an art installation with Vlado. Your messages will be presented as a part of the physical intervention in free space and/or also in the medium Internet. The messages may contain:

- Perhaps only the honest greetings

- Messages about love & peace (never enough of these, believe me) and generally: humanistic ideas

- Messages with the ideas how one can be a better human, how and in which way one schould grows up and be a part of a better society, messages about the best ways how one could solve the conflicts at the relation youth - adult, domestic people - immigrants, etc.

Thanks to everybody who will directly take part in the project and send the contributions or who will be able to publish this invitation in media or using internet social platforms!

E-mails with Your messages musst have subject: FOR THE PROJECT PLUS/MINUS and be sent up NOW and until 24th September 2010 midnight to following address vlado@adon.li. Messages can have also form of a picture or a photography, must however follow the topic and stay in given frameworks. If the written messages contain in itself up to 10 words, they will be possibly noted "on the wooden plus Elements" which will be parts of the installation in a free space. All other messages will be presented in the Internet. Photographies and graphic contributions must contain correct names, address and the occupation of the authors as also the date and place where a photography were made. No one contribution will be accepted which hasn't all this informations! For those who is only interested for the contributions with the written messages, are valid the rules like: correct name, the apartment address and the occupation of the authors. Messages can be written in native language but must be also translated in correct german.

At the conclusion still this message:

a) Vlado wrote a simple text in English which will be first translated in Indonesia into the Bahasa Indonesian and after that composed in music piece by Deni Rahman and co. Deni is one of the students who participated in 2002 in Vlados group in ISY, Yogyakarta. The idea is, this song will be promoted at the Radio L in Liechtenstein at least resisting the school project days from 26th - 30th September 2010! First contacts to the radio were undertaken!

b) The painted "plus" Elements which will be parts of installation, will be hopefully sold in an auction a bit later. All collected funds has to flow to a humanitarian project! So Vlados wish... 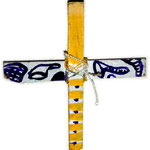 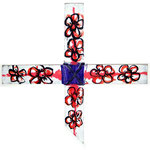 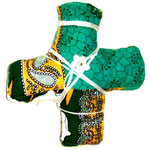